Asian Americans and Affirmative Action: Some Thoughts about the Harvard Lawsuit by Natasha Chen Christensen

Asian Americans and Affirmative Action: Some Thoughts about the Harvard Lawsuit by Natasha Christensen

I am a Taiwanese American sociology professor who has been following the Students for Fair Admissions v Harvard court case with frustration and anger. The suit alleges that Harvard discriminates against Asian Americans who have high GPAs and standardized test scores by rating them lower on subjective metrics. A group of Asian American parents, under the guidance of anti-affirmative action crusader, Edward Blum, claims that the only way to remedy this discrimination is to do away with race as a consideration in college admissions.

As a child growing up in an academically competitive environment, the words that I heard from white people following any mention of affirmative action were “underqualified” and “undeserving”. In fact, when I was first hired for my current faculty position at Monroe Community College in 2009, a colleague contested my hiring by maintaining that I was an “affirmative action hire”. The implication was that I was underqualified for the position and that I was hired only on the basis of my race and gender. This colleague was so convinced that I was undeserving of the position that the college had to run another search the next year only to offer me the position again. The irony is that the colleague had never seen my CV and didn’t know my background or experiences. My face was the only data that they needed.

The truth is that I am a beneficiary of affirmative action. At the same time, I have also never scored lower than 99% on any standardized measure of scholastic aptitude and have consistently been an honors student my entire life. I say that not to brag about my academic aptitude, but to make the point that affirmative action’s primary function is not restitutive. It isn’t about awarding positions to under-qualified individuals or even about benefiting individual underrepresented students. Instead, race-plus policies are in place to strengthen academia and U.S. society in general.

I am part of the first cohort of Asian Americans born in the U.S. after almost a century of being banned from immigrating to America. The Immigration Act of 1965 re-opened immigration from East Asia in order to fill a void in the fields of technology, science engineering, and math. The top STEM students from elite universities in Taiwan, Hong Kong, and South Korea were encouraged by our government to earn their Ph.D.s and work in the U.S. The recruitment was so thorough that my dad’s entire class of engineering graduates from National Taiwan University holds their reunions in America. Since I was born in 1971, I grew up being part of a highly educated minority that was less than .5% of the overall U.S. population.

In 1993, I began my doctoral program in sociology at UCLA with full funding from Project 88, an affirmative action program. I was selected because Asian American women were underrepresented in the social sciences at the time. My voice and perspective, as well as the other men and women of color who were funded by Project 88, helped to enrich academia. Unfortunately, California’s Proposition 209 ended race-plus admissions and scholarships in 1996. This had a tremendous impact on diversity in California. Currently at UCLA, blacks make up only 4% of the student body while Asian Americans make up 40%. To contextualize these numbers, in Los Angeles, blacks are 10% of the population and Asian Americans are 11%.

Many people assume that affirmative action involves requiring every college and employer to reserve spots to fill a quota. The truth is that quotas were deemed illegal by the Supreme Court in 1978. With UC Regents v Bakke, the Supreme Court found the use of quotas as unconstitutional, but upheld the use of race-plus policies in which applicants are evaluated using an index of variables that include race as well as other dimensions such as exceptional artistic or athletic skill, unusual life circumstances, legacy, and economic disadvantage. Race-plus policies were not justified as “the right thing to do” or as restitution. Instead, the Supreme Court maintained that “the insights provided by the participation of minority students enrich the curriculum, broaden the teacher’s scholarly interests, and protect other students from insensitivity to minority perspectives”.

In 2015, with the case Fisher v University of Texas, the Supreme Court ruled that the university did not discriminate against Abigail Fisher, a white woman who sued for reverse discrimination. Again, they upheld race-plus admission policies as aiding in “…the destruction of stereotypes, the promotion of cross-cultural understanding, the preparation of students for an increasingly diverse workplace and society, and the cultivation of leaders with legitimacy in the eyes of society”. All of those elements are referring to the benefits that students of color bring to the academy. Once again, the focus is on strengthening American society through the inclusion of all races.

Part of my frustration stems from how these Asian American parents suing Harvard have framed the issue. Currently, 23% of the freshman class at Harvard is Asian American. Since Asian Americans are only 6% of the overall U.S. population, the claim that Harvard discriminates against Asians seems rather odd. The main issue here is that those parents view high test scores and GPA as the only determining factors in admissions, which makes sense when you view the East Asian model. In Taiwan, China, South Korea, and Japan, a child’s education future rests on a single college entrance exam. This exam generally last 8 hours over 2 days, and determines whether a student can attend college, which college they can attend, and what discipline they are allowed to study. To this end, most East Asian children’s lives are a nonstop college exam prep. On top of their regular school day, many parents enroll their kids in “cram schools” so that they can best be prepared for this exam.

As a second generation immigrant, the East Asian model of education was imposed on me since birth. My entire life was a nonstop college prep course. I was taught to believe that every test, assignment or competition was a make or break moment and my future success depended on it. I wasn’t allowed to pursue my own interests because they wouldn’t look as good on a college application than the ones that my parents chose for me. Of course I had a high GPA and standardized test scores. I was taught to believe that the sum total of my worth was through academic achievement.

Having taught at the college level for the past 25 years, I know now that I was an exceptionally bland first year college student. Sure, I was good at studying. But, being good at studying isn’t the only factor that makes an excellent student. And students who are good at studying but have no experiences in life except the ones their parents thought would get them into college make for the opposite of a robust educational experience. It was only after I took control of my own education that I found my voice and purpose. Some of my best students have been black, Latinx, and Southeast Asian students who may not have been the most polished students academically when they started college, but had life experiences and backgrounds that allowed them to provide a perspective and voice that enriched their classmates’ educational experience. And, in the same way that college allowed me the opportunity to discover my voice, college allowed these students the opportunity to hone their academic skills and techniques. After all, not many first generation students of color have the same level academic resources and support that the children of Ph.D.s from the top universities in the world have while growing up.

Teaching sociology in a diverse classroom is a vastly different endeavor when there is representation that reflects larger society. I can quite honestly say that my students at Monroe Community College learn more in my Sociology of Race and Ethnicity classes than the students I’ve taught at predominantly white private liberal arts colleges. It has nothing to do with my teaching abilities or the students’ academic prowess. Instead, it has to do with learning the skills that allow them to discuss race relations in a diverse classroom. My community college students end up acquiring a valuable skill that most Americans believe is impossible to achieve.

I often wonder about the Asian American kids whose parents are suing Harvard. Are they angry at their parents for trying to destroy the already limited policies that are in place to strengthen academia and the U.S. labor force through diversity and inclusion? Are they resentful that their parents are implying that the sum total of their worth lies in their acceptance to Harvard? Are they mortified that their college rejection has turned into a national debate?

I know I would be.

Dr. Christensen earned her doctorate in sociology at UCLA. She’s currently a MCC professor who specializes in race and ethnicity, gender, sexuality, and social class. 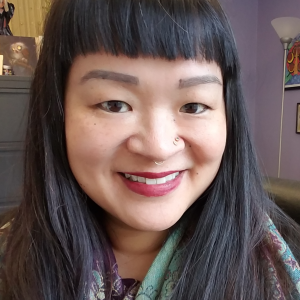